I can’t quite remember when my fascination with upholstery began. It may have started the same day I unearthed my love for thrift stores back in art school when I was always on the hunt for the perfect authentic bell bottom or anything with a “seventies” flare for that matter. I would always succumb to the urge to peruse the newly unwanted furnishings in the back of the store. Each piece was outdated, but not quite old enough to earn the title of antique and an opportunity to transform what someone considered expendable into a one-of-a-kind treasure.

In my furniture fantasy, the transformation would be glorious. I would gently remove the old, worn covering, clean and refinish any exposed wood, attach new fabric (bought during a special trip to the fabric store), and marvel at my finished work. To live the dream, I just needed to select an item and figure out how it had been put together. But each piece I examined, be it a chair, an ottoman, or God-forbid a sofa (cue horror movie music), would seem harder than the last to visually break down. Wrapping my mind around how the original maker of each piece had been able to conceal the staples and nails so seamlessly, add piping perfectly on corners, and position stitched seams with such precision were daunting. Intimidated by an unclear process, I found myself procrastinating about the bucket list item.

But last week, the stars aligned. I found myself all out of excuses when I realized I needed a cool chair in a specific color for a show set I was working on. And just like that, I found myself in the midst of a glorious transformation.

Everyone’s upholstery journey is different. You’ll find that each unique piece of furniture holds a story beneath its fabric. Here’s the story of my wingback chair.

Supplies (What I Used)

I already had a few of the supplies I needed. But I did purchase things like fabric, upholstery tacks, and a rubber mallet. Whether you’re an amateur like me or a professional, many of the items below are pretty standard for anyone upgrading furniture. This post contains affiliate links. If you buy any of the items by following the link I may earn a small commission at no additional cost to you.

I started with an old wingback chair that was gifted to me by my better half. In a previous life it had been a lounging spot for Karma, our laid-back little Burman cat. She is no longer with us, but I’m happy her spirit lives the story of this chair.

My first task was to remove the dust cover from the bottom of the chair. I used a tack lifter along with a puller to remove each staple. The dust cover is designed to do just what the name implies, block dust from getting past it. And there was a lot of dust. Needless to say, it needed replacing.

The staples were old and rusty. So to prevent any accidental wounds to little (or big) bare feet, I kept a garbage bin close by to make sure that each one I removed landed inside of it and not on the floor.

Once the dust cover was off, I worked on removing the fabric from the side. Beneath that fabric I discovered a metal tack strip along the front edge. That portion was easier to pull off. Once one nail came out, I didn’t have to use any tools to pull out the rest of the strip. Just my hands. Tack strips are the secret to clean, professional-looking upholstery projects. They are used underneath the fabric to create crisp edges and to secure the fabric in place without visible staples.

Labeling Each Piece of Old Fabric

I labeled each section of the fabric before I completely removed it. This was one of the most important steps because I later used them as templates for the new pieces. I started off by using a white chalk marker and wrote directly on the fabric. But I found that it was easier to just use white duct tape and a permanent marker. I was sure to not only label the location of the piece (i.e., right arm), I  labeled what part of each piece was positioned toward the back and front. I also paid special attention to how the fabric was wrapped beneath the chair so I could replicate it with my new fabric.

Once I’d removed it, I put each piece of old fabric in a box to revisit later.

I was surprised to discover that to remove some of the main pieces of fabric, I had to take the wooden parts of the chair apart too. Some of the screws I needed to remove were embedded deep within the wood so I had to use my drill and a small drill bit to dig around the outer edge of the screw head before I could fit the 5/16 ratchet attachment around it enough to grip and rotate it. Once that part was done, I was able to successfully pull off the back of the chair. I ran into the same challenge and solution when removing the cushioned seat portion.

After really examining the chair, I noticed some structural damage on one of the rear legs. There were a few ways I thought I may be able to fix this problem. I could use wood glue and a clamp to fuse it back together. I could make a new leg by tracing the old shape onto a 1” by 4” board, cutting it out using my jigsaw, and refinishing it to match the other legs. Or I could just remove all the legs and attach new ones. This way would involve cutting two of the legs off (flushed with the base of the wood of the cushion portion) with my jigsaw, some sanding and some drilling. I could simply unscrew the other two legs. Because I was more accustomed to only cutting in a straight line and not a curved one with my jigsaw, I chose the latter.

Before doing the big chop, I measured the length of the existing legs and ordered replacements in a style that I liked. The legs I needed to saw off were made of a compact wood that was little difficult to slice through with the jigsaw blade, but once I finally removed the all four legs, I attached more modern ones and was delighted with how the chair began to take on a new look.

One thing I love just as much as creating something new is shopping for supplies for creating something new. Especially fabric. I wasn’t sure exactly what fabric I was seeking for the new look of the chair. I knew I wanted a shade of orange. Something bright but not visually overwhelming.  I took my time perusing the aisles of upholstery rolls and chose a thick solid orange fabric with quilting that was velvety to the touch.

When I got my fabric home, I was ready for the next step. Before I could trace the old pieces onto the new fabric, I had to first make sure those old pieces, namely the wing covering with piping and the cushion cover, (which was sewn to fit the shape of the chair) were pulled apart. For that, I used my seam ripper. Afterward, I spread my new fabric right side up on the floor, laid each old piece right side up on top of it, drew an outline of the old piece directly onto the new fabric, and cut it out.

When the time arrived to sew the new pieces together as the old ones had been I had some trepidation. First. I’d never sewn piping a day in my life, furthermore, I’d never sewn a custom cover for a piece of furniture other than the bean bag pouf I’d made for my daughters’ room some time ago. Third. What if the seams of the new custom covers didn’t line up where they should on the chair?

Just in case any of my worries became reality, I devised a backup plan. The new fabric had a lot of stretch. If sewing those pieces didn’t work out, I’d just tightly wrap and staple  unsewn fabric pieces to the uncovered chair parts.

Thankfully, aside from a few issues that popped up because the fabric was a tad too thick, the sewing and fit sufficed.

When the moment of truth arrived and I was tasked with attaching the new fabric to the bare cushioned chair parts, I’m happy to announce that my challenges were minor. Once hiccup occurred when the fabric proved to be a tad too thick to staple in areas where it overlapped. Also, the staples I used weren’t able to penetrate the fabric, the padding, and the wood. With a little tug, one would pop out from time to time. I later learned that the container of staples I had was a variety pack of different sizes and I had been using the shortest staple size the whole time. With my newfound awareness, I went back and used the tallest sizes to reinforce the areas I’d already stapled.

Putting it All Back Together

With each separate part of the chair covered with the new fabric, it was time to reassemble its parts. The seat portion and the sides came together perfectly. Very tightly with no gaps. But my handheld ratchet tool was not enough to close gaps between the arms of the chair and the back. That coupled with my lack of strength was enough to make me pull out a large clamp. I only had one that fit and it turned out that one wasn’t enough.

The next day I bought three 9″ clamps and tightened them along the top and bottom sides. I also bought a 5/16 drill attachment for the hex screws. I’d hoped that using four clamps instead of one and a power drill instead of a manual ratchet would give me the pressure I needed to close the gaps. And I was right!

The last few steps involved adding the skirt, the back, the armrests with tacks, and a new dust cover. For some added reinforcement and protection, I added craft jute in a criss-cross pattern at the bottom.

What I Would Do Differently

Removing staples and tacks turned out to be the most time-consuming part of the project. But sewing and reassembling were the most worrisome for me. Each layer that I stripped away created a new puzzle piece that I was tasked with recreating and putting back together. In find solutions for challenges, I learned about new tools and techniques that I can now use on my next upholstery project. Here are a few things I would do differently: 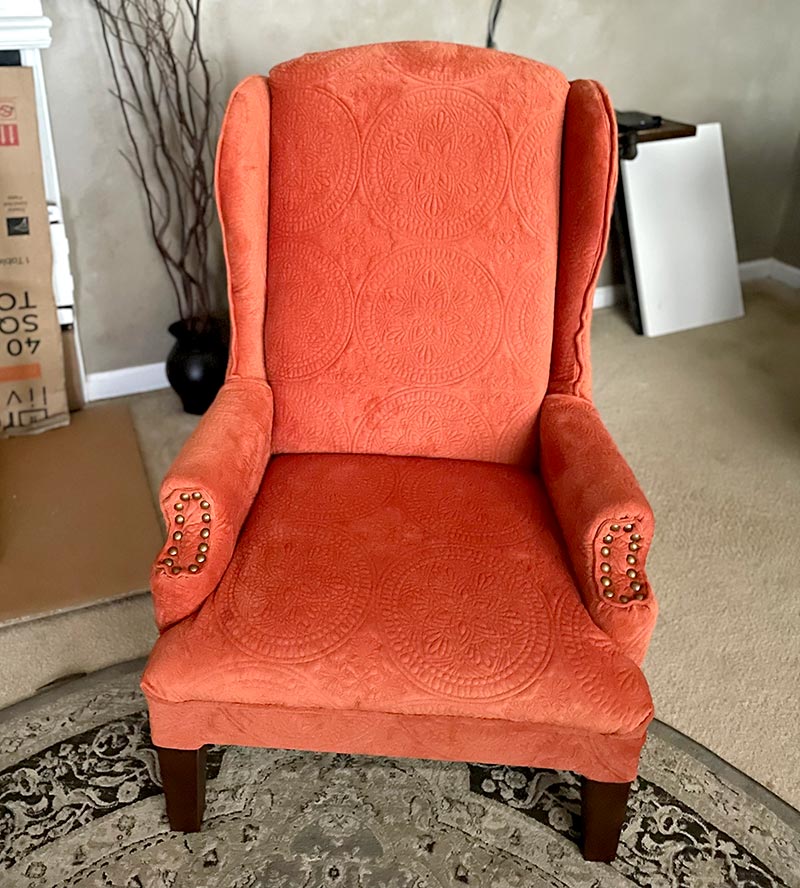 Reupholstering my first chair was fun and rewarding. It took me about a week if you only count the days I worked on it. But if you count the days that I set it aside to tend to other things, the duration was about two weeks from start to finish. This project taught me a lot about upholstery fabrics, how furniture is made, and the best tools for the job. Now please excuse me while I relax a bit in my new chair.

See new how-to premieres and more at ITC on Patreon.